I'm nothing, if not obsessed with reaching a successful conclusion, and this pizza endeavor is no exception.  The first two iterations of the Weber pizza oven weren't quite working the way I wanted.  I got close to my desired result a couple of times, but keeping the fire going, without the right amount of ventilation, was a real challenge.  The key to a good pizza is a fast cook, at intense heat.  A slow cook turns out a harder, denser crust, which isn't good.  I wanted crisp on the outside, with blisters in all the right places, and soft and chewy on the inside.  I needed more heat.

I needed to think long and hard about using wood, and cooking my pizza at very high heat.  Briquettes and lump charcoal just were not cutting it.  I also had the issue of ventilation for the fire blazing in the kettle below the cooking chamber, or 'oven'.

We drilled out some holes in the bottom of the kettle, and that helped with ventilation, but it wasn't quite enough for this set-up, though it certainly helped. 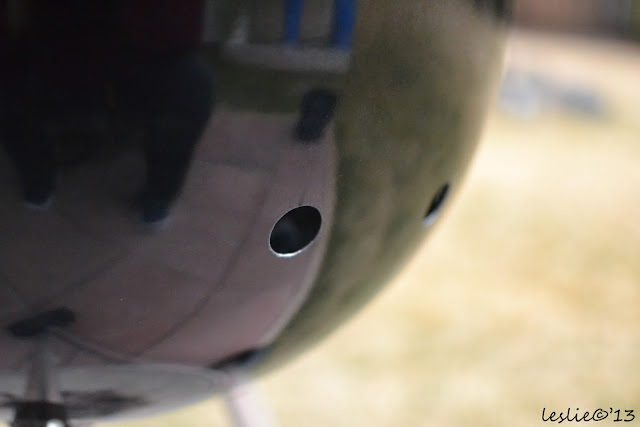 Before I special ordered fire bricks, I decided to run a $2.94 experiment.  I purchased six bricks from the local home improvement store.  I used four of my baking tiles on the grate, circled the perimeter with the purchased bricks, and placed the lid on the top edge of the bricks.  This created the 'oven'.

By placing the support bricks out toward the perimeter of the kettle's edge, I was able to draw the heat up and into the 'oven'.  The gap between the tiles and the support bricks would further aid in moving that heated air exactly where I wanted it, while ventilating the fire, which would keep it burning hot.

This idea would prove to be the right one, but the materials I used would not hold up to the heat of the wood burning fire.  My baking tiles cracked, and by the time we removed them from the fire, and heated new ones, we'd lost the optimum cooking window for the pizza.  The highest heat had passed, and cooking time was too long.  The make shift grate had also taken a beating from the heat.

Even with these failures, I really felt I had the right idea.  I just didn't have the right materials.  It was time to procure the fire bricks, and a more stout grate.

Lucky for me I found fire bricks locally, and inexpensively.  I ordered a porcelain enameled cast iron grill grate online last night, but it won't arrive for a couple of weeks.  Not a patient woman, I chose to procure a heavy duty grill grate locally so I could continue the pizza chronicles.  I will switch out to the cast iron grate when it arrives, but the one I found today will keep the trials moving along.

Here is the current set-up, complete with the new fire bricks... 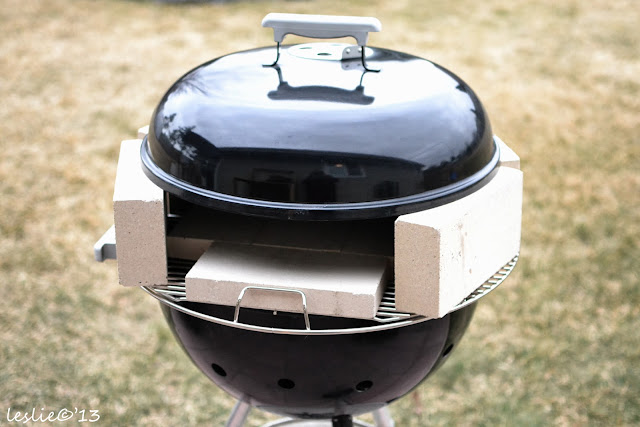 A closer look inside shown here.  I'm a little concerned that I have too much height over the floor of the 'oven', but tonight's experiment will answer that question.  Given how hot things got in the failed set-up from yesterday, I think we'll be okay, but getting the perfect pizza is an exercise in experimentation and persistence. 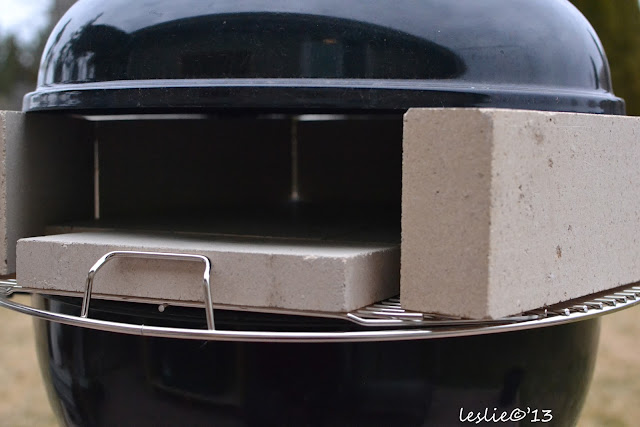 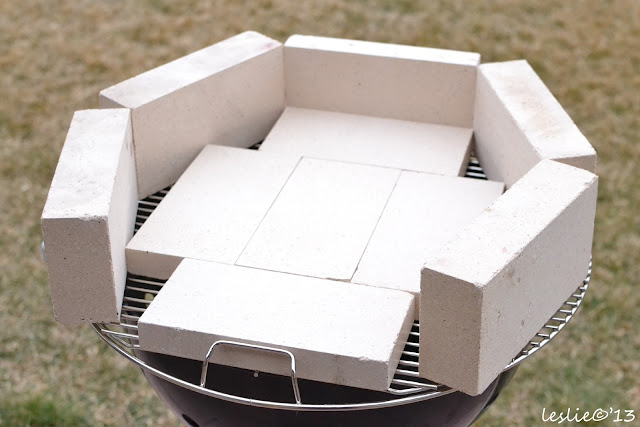 The gaps between the floor and the side support bricks are intended to bring the heat from the fire in the bottom of the kettle into the oven, or brick chamber.

This is not a large Weber.  It's the smaller, 18-1/2" diameter kettle.  I would prefer this set-up in a 22-1/2" kettle, but this is what I have, and for just the two of us, it works.  A 12" pie fits just fine, and the fire burns hot enough, and long enough, that a second pie could easily be made after the first.  I imagine even a third would be possible before we would start losing heat.

Firing it up tonight.  More in the pizza chronicles tomorrow, hopefully with photos of a perfect pizza pie.

Posted by Leslie Renaud Kuther at 4:12 PM No comments:

The pizza chronicles, part one

Anyone who works with wild yeast bread dough has a secret desire for a wood fired oven, but many of us just do not have the money necessary to install one for the minimal use in a home setting.  I am one of those people.

I love homemade pizza, made with wild yeast dough.  Until recently, I'd made it in my oven, but was never completely happy with the results.  A soggy crust, and over-cooked toppings were often the result, not to mention the mess.  After a layer of corn meal on a pizza peel, and a shake or two to get the pizza into the oven, and onto the tiles, I was often left with an oven floor coated in corn meal.  Ever smell burnt corn meal?  If not, let me enlighten you.  It stinks!

I decided it was time to move the pizza making to the great outdoors, and into my trusty Weber kettle, though I knew modifications would be in order.  I was ready to retire the Weber from its regular grilling duties, and dedicate it to the pizza making that takes place in our home. 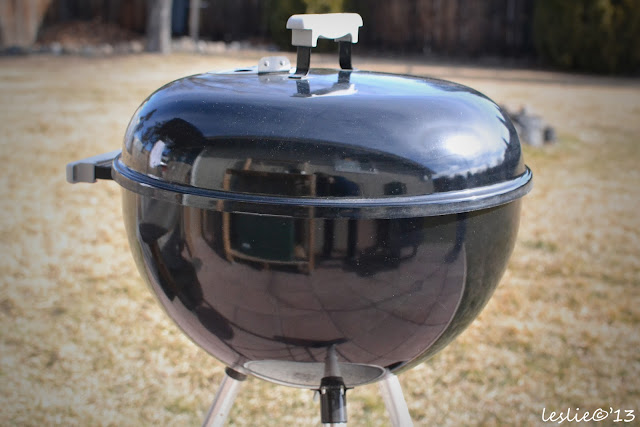 I set a layer of charcoal a flame, set my grill grate in place, then added my four quarry tiles (these tiles are made for commercial ovens, and are certified food safe).  I let everything heat up, lid off, until the tiles were fully heated, and my coals were red hot.

Pizza on peel, I slid the pie onto the tiles and set the lid in place.  About 8 minutes later the toppings looked great, with nicely charred blisters along the crust edge.  I removed the pizza, which looked good, but upon further inspection, discovered the bottom of the crust was completely black.  I like some char marks, but a completely burnt crust wasn't what I had in mind.

My solution was to add four broken bricks (I just happened to have some) to my grill grate, add a smaller grill grate on top of the bricks, then add my tiles.  This gave me exactly 2" of clearance between my tiles, and the top of the lid at the highest point - perfect!  It also gave me more air space between my coals and my tiles. 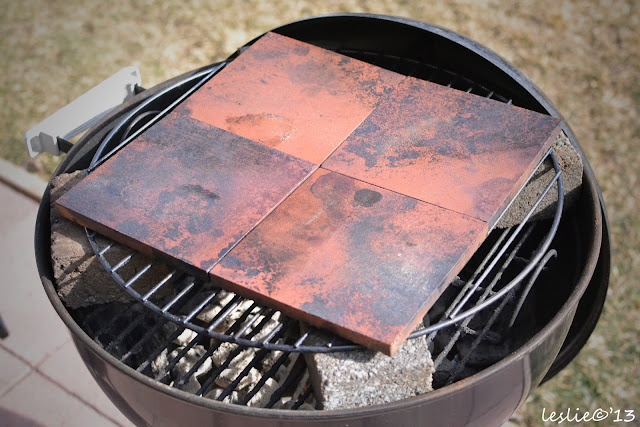 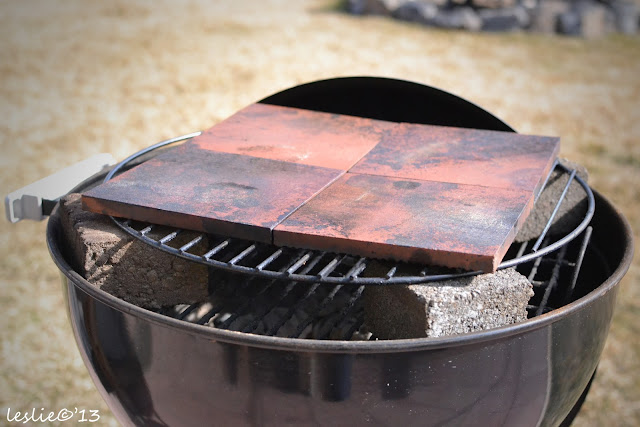 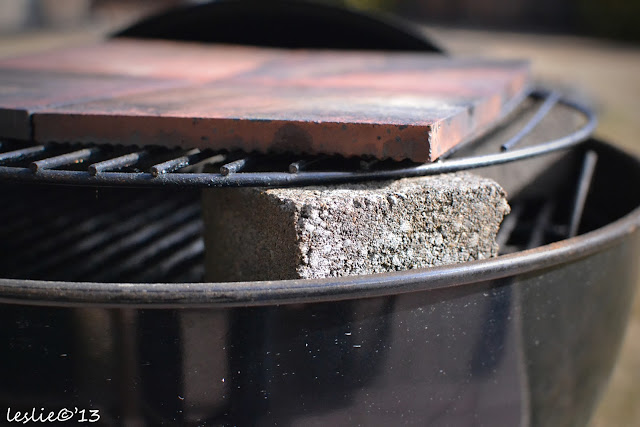 This was a good solution, but cooking time was still too long, yielding a crust that was crunchy vs. crispy.  Crunchy isn't what I want.  I want a crust that's crispy on the outside, with plenty of char, and 'leoparding', yet soft and chewy on the inside.  I'm still not there.

Higher heat and ventilation were two nagging problems.  More work to do, but for a first real effort, it wasn't a bad solution, and the pizza was good, if not great.

Stay tuned for more in the pizza chronicles.
Posted by Leslie Renaud Kuther at 11:54 AM No comments:

When I make something with buttermilk, I'm often left with an amount I can't find a use for, so it almost *always* goes to waste.  Tired of the waste, I decided to try a traditional dish with a twist; buttermilk French toast. 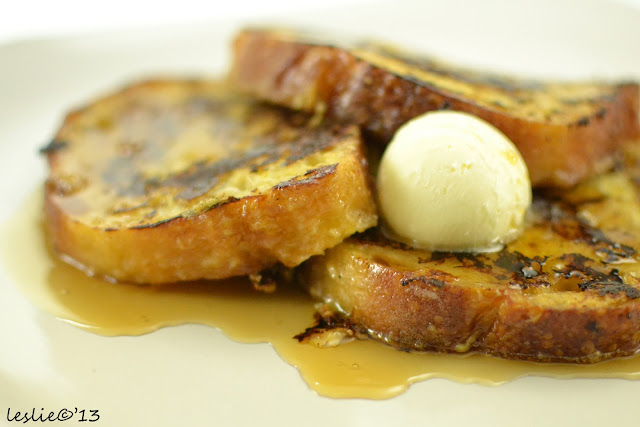 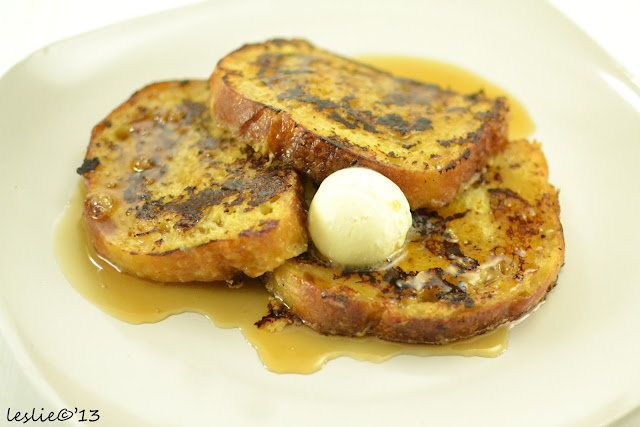 I really wasn't sure if it would be a hit or a miss, but my desire to use up the buttermilk outweighed my concern about any result I might achieve.  The gamble paid off.  It was delicious!  If you ever find yourself with that leftover buttermilk, and don't have a use for it, I encourage you to give this dish a try.

In a shallow pie pan, combine buttermilk, cream, sugar and eggs, and whisk well.  Add bread slices (as many as will fit at one time), and soak on both sides until egg mixture penetrates the bread (about 1 minute/side).

To a large skillet, add 1 tablespoon of butter (refresh butter, as needed, as you cook each batch of bread slices), and heat over medium until butter is no longer frothy, and starts to brown just slightly (but isn't burning or smoking).

Add soaked bread slices to the heated skillet, and cook until a deep char forms on each side.  Remove from pan, and serve with butter and maple syrup.

This recipe is enough for two adult servings.
Posted by Leslie Renaud Kuther at 8:36 AM 2 comments:

I made a cake yesterday.

The cake I made is one from my childhood.  It was the cake I always asked for, for my birthday.  A dark chocolate cake, with a warm chocolate fudge frosting.  It was the recipe of a friend of my mother, and it was she who made it for me, every year.  Her name was Jackie. 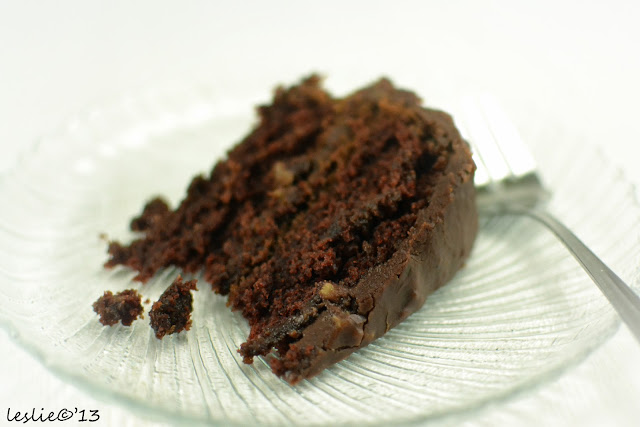 She always wore beautiful make-up, and had pretty clothes.  My own mother never wore make-up, and I was fascinated with Jackie's.  Jackie didn't have a daughter, and I always thought she should have had one.

Every few weeks Jackie would bring a gallon size Ziploc bag to our house, *full* of make-up that she'd barely used.  She was always buying something new.  The bag was full of the best; Lancome, Estee Lauder, Dior and the like.  It was like a treasure, and my sister and I loved and used it.

Jackie never had a sister, either, and she called my mother "sissy".  They were friends for many, many years.

The day Jackie died, I walked into her hospital room to say "good-bye".  She was laboring to breathe, and couldn't speak, but for a fleeting moment she looked me straight in the eye, and I swear I heard her say, "I love you".  She passed away not long after.  I have often wondered if I imagined her words.

I think of her whenever I make her cake.
Posted by Leslie Renaud Kuther at 9:19 AM No comments:

...when the heart candies come out of the box like this, especially because we are breeding our beloved Kindle this week.  Ty has been very present here this morning, as well. 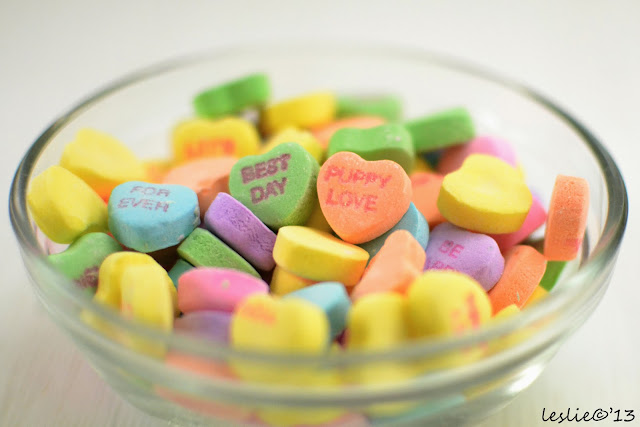 Posted by Leslie Renaud Kuther at 6:24 AM 4 comments:

Last weekend, sunrise, out by the airport...it was so pretty. 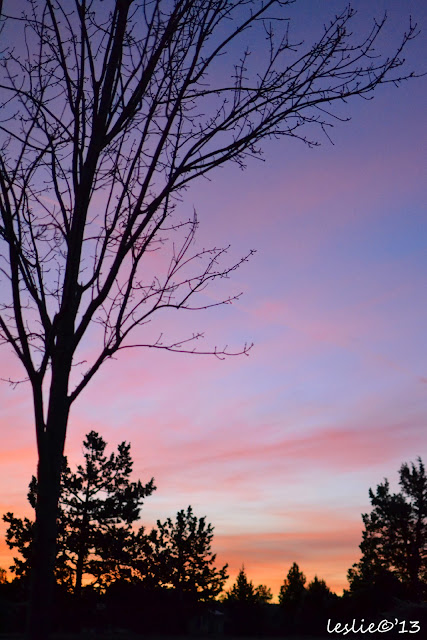 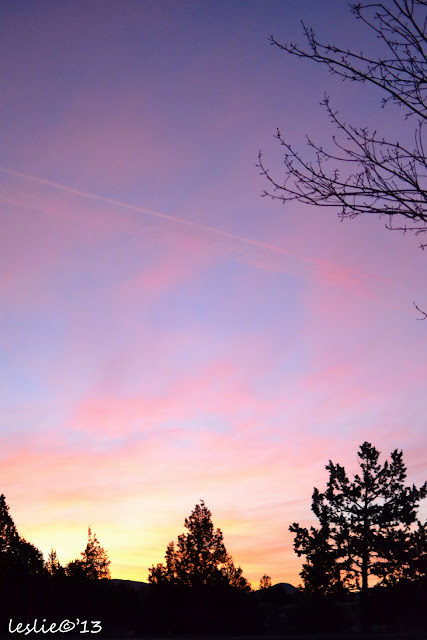 Posted by Leslie Renaud Kuther at 10:48 AM No comments:

Email ThisBlogThis!Share to TwitterShare to FacebookShare to Pinterest
Labels: Photography

Hilppa's scones with a flavor twist

This morning I made Hilppa's scones again, this time with dried cherries and orange zest vs. raisins.  I did not have buttermilk, so I used just whole milk, and I think the milk hurt the creaminess of the dough - it just wasn't quite up to par with the buttermilk version.  The flavor combination of the cherries and orange zest was superb, however.

The only way to eat these, is fresh from the oven, in my opinion.  Super warm, fragrant and immensely flavorful.  There is just no limit to the flavor combinations that can be made.  Sweet, savory...anything.  Next up, a rosemary and white cheddar version.

Give these scones a try.  You will not be disappointed...but make sure you use buttermilk for an ultimate scone experience.  And do not over bake them.  They can become dry, I have learned, if baked too long.

Happy scone-ing, friends, and happy Monday!
Posted by Leslie Renaud Kuther at 6:49 AM No comments: